The Viper (also known retrospectively as the Viper Classic) was a yo-yo produced by Henrys, first released in 1997-1998.

The Viper was the first yo-yo product ever made by Henrys, a Germany-based manfacturer of juggling equipment. It consists of an anodized aluminum hub with large, removable rubber shells that form into a Butterfly-shaped body profile, meant to resemble their diabolos. At 65mm in diameter, it was one of the largest yo-yos of its time, and the size allows it to be more visible during performances.

Its axle features a ball bearing for long spin times, and O-rings that form the "Quicktrick" gap adjustment mechanism, which allows the user to widen or narrow the string gap by simply twisting the body halves inward or out. This also allows the user to transition to different levels of play on the fly. The Viper was also one of the very first yo-yos to popularize the 4A (Offstring) playing style, thanks to the rubber shells allowing the yo-yo to bounce off the ground after a harsh drop while absorbing the force of the impact.

The Viper had also proved popular for 1A, especially when it is modified. One common modification by Viper owners involved making a recessed starburst response system by cutting radially positioned holes on the inside of the Viper's aluminum hub. Another popular mod, which was invented by Doctor Popular in 1999, is to "beefcake" the yo-yo by adding another bearing to the axle, to widen the string gap and make it less responsive. This also allows the placement of friction stickers on the Viper without it being too grabby on the string. The yo-yo's rubber shells were also popular for modding, such as dying them in different colors, as well as installing them in undersized yo-yos such as the Tom Kuhn Pocket Rocket and the YoYoJam MiniJam.

The Viper was also licensed to Bandai for the Hyper Yo-Yo line as the Hyper Viper, and was promoted in Japan by Dave Schulte and Jon Gates in the Team Hyper Viper tour. 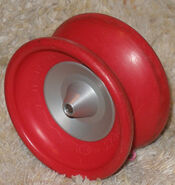 Internals view
Add a photo to this gallery
Retrieved from "https://yoyo.fandom.com/wiki/Henrys_Viper?oldid=43338"
Community content is available under CC-BY-SA unless otherwise noted.