The AnY MiRoC is the first Mass produced yo-yo with Side Cap Bearings. The Miroc is also the 3rd yo-yo released by AnY (after the QuickSilver 1 & 2) and the first to be generally available in the United States through an on-line store. A total run of 100 yo-yos were made, with 35 sold through YoYoNation after an agreement was reached with YoYoJam regarding the o-pad technology, a variation of the YoYoJam patented o-ring.

The yo-yo is the first in AnY's four saint beast series, featuring a bearing on the side that aids in performing matador-style tricks. This feature quickly became one of the yo-yos drawbacks, as some owners reported loose side bearings as well as sidecaps (covering the bearing) that would fly off during tricks.

AnY MiRoC by AnYis the first Mass produced yo-yo with Side Cap Bearings. There have been other metal and plastic yo-yos with side cap bearings, but they have been done as a custom modification, such as the Gladiator, which is listed on the [Difeyo-yo] site under Modding and Custom work. 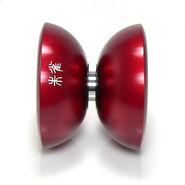 Add a photo to this gallery
Retrieved from "https://yoyo.fandom.com/wiki/AnY_MiRoC?oldid=27351"
Community content is available under CC-BY-SA unless otherwise noted.