The Buzine$$ (also known as the Biz for short) is a yo-yo from Anti-Yo and is Brian Cosky's signature yo-yo, released on Martin Luther King Day in 2007. It is smaller than your average yo-yo, with a profile that is said to have possibly come from the Duncan Mosquito. It also features the usual low-friction Slip Matte finish, a KonKave bearing, and Kentaro Pad response. Its production run is limited to 450 pieces.

Also released were the Risky Buzine$$, which had a polished finish and was limited to 10 pieces, and the Black Buzine$$, of which only 12 units were made and had a blackish-colored finish. 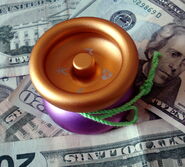 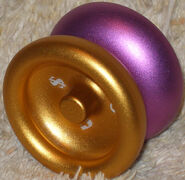 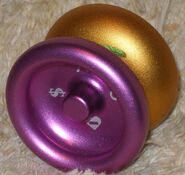 Retrieved from "https://yoyo.fandom.com/wiki/Anti-Yo_Buzine$$?oldid=43811"
Community content is available under CC-BY-SA unless otherwise noted.