Recessed Baz Pads
The Eetsit by Anti-Yo, released on February 14th, 2006, was the much-awaited successor to the Fluchs.

Like its predecessor, the Eetsit has a machined aluminium body with a low-friction Slip Matte finish, but this time, it also has a large Dif-e-Yo KonKave bearing and an IRG lip. Unlike the Fluchs, which used Dif Pads, the Eetsit comes stock with recessed Baz Pads, which are made of plasti-dip.

Like the earlier Fluchs, the Eetsit had some issues. The string gap on the yo-yo was just a little too wide, causing the string to occasionally slip in between the bearing and the side of the yo-yo. This design flaw could be remedied by replacing the stock Baz Pads with thick Dif Pads. Some players had instead opted to sand down the bearing seat of their Eetsit yo-yos in order to correct this problem. The Bapezilla was later released as a follow up to the Eetsit, fixing the problematic string gap. 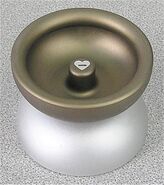 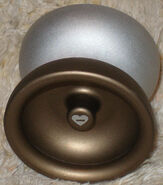 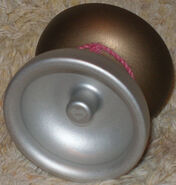 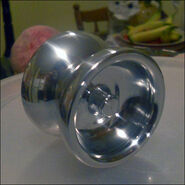