The Hyper Infinity (Japanese: ハイパーインフィニティー) is a yo-yo produced by Bandai, released on April 2nd, 2011 as part of the third iteration of the Hyper Yo-Yo line.

The Hyper Infinity is a plastic-bodied yo-yo featuring a battery-powered electric motor that allows the yo-yo to spin as long as possible, batteries permitting. It features a plastic "Gear Bearing" that connects to a gear box on the motor. When the yo-yo is thrown down in a sleeper, the Gear Bearing triggers the motor through the gear box, making the yo-yo spin. Of course, the yo-yo's motor can also be activated by spinning the body. On one of the sides of the yo-yo body is the battery cover, which is removed via screwdriver, and from there, the user can insert and remove batteries, of which the AAA size is required.

The Hyper Infinity also features a Response String with an adjustable plastic tube on it. Positioning this tube determines how responsive the yo-yo is. Normally, when the user wants the yo-yo to return to his/her hand with a tug, the plastic tube is set for the yo-yo's Rubber Friction response pads to grab onto with a tug of the hand. To make the yo-yo less responsive, he/she can move the tube away from where the pads are. The Gear Bearing, Response Strings, and Rubber Friction pads are all consumable goods, so they would have to be replaced periodically.

Despite its potential to sleep for nearly limitless amounts of time, the Hyper Infinity is regarded by the community as a novelty item rather than a serious competition yo-yo. 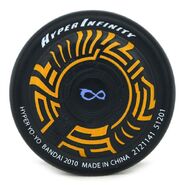 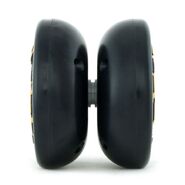 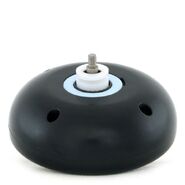 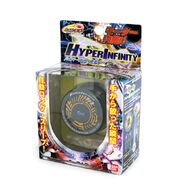 Retrieved from "https://yoyo.fandom.com/wiki/Bandai_Hyper_Infinity?oldid=40506"
Community content is available under CC-BY-SA unless otherwise noted.