When Chris Mikulin and Paul Wallace were designing the return top, they wanted to combine the elements of some of their favorite models, such as the YoYoJam Hitman and the YoYoFactory F.A.S.T. 401k, with the addition of a recessed flowable silicone response system. Each Peak is airbrushed with the image of a mountain peak by custom painter extraordinaire Levi McCarroll.

The initial run of the return top was exclusive to Yoyonation, and another batch of Peaks were released in 2007 directly from their store (this was the first 28 Stories edition, and a portion of the profits were donated to HIV/AIDS research).

A third run, which was beadblasted and then anodized in various colors chosen by CLYW's team players, was released exclusively from Yoyonation in April of 2009.

The different versions were Hulk-Smash (Jensen Kimmitt edition), Sebastian Brock edition, Chesterman Beach edition, Clareview Station edition, and a second run of the 28 Stories edition (again, with a portion of the profits donated to HIV/AIDS research).

In December 2016, it was announced that the first run of an updated version of the Peak would be released to celebrate the 10th anniversary of the original. This new Peak was released on December 19th, 2016. 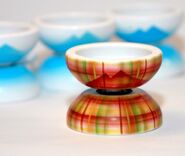 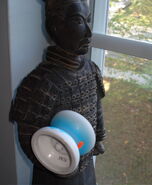