Starburst
The Mondial was released in 1998 by Came-Yo, as the successor to the earlier Moonstar, and was designed by Harry Baier. Like its slightly lighter predecessor, the Mondial was an all-aluminium yo-yo, with rubber rings on the rims to cushion the blow on catching, as well as protecting the anodization when the user walks the dog with it.

It had an adjustable string gap, but the method was a radical innovation at the time; a ratcheting mechanism. Each click of the ratchet was claimed to adjust the width of the string gap by half the width of a human hair. For an added bonus, was that this was a self-lubricating yo-yo: the user could just inject some thick lubricant into the port on the side, and the yo-yo would slowly release it onto the bearing over time.

The rights to the Mondial are currently owned by Duncan, who produced and sold it from the early 2000's to 2009-2010, initially as part of the Hardcore series, and later on, in the De-Luxxe series. 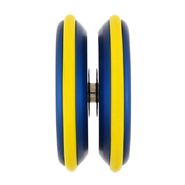 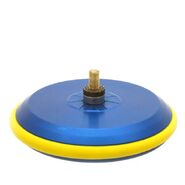 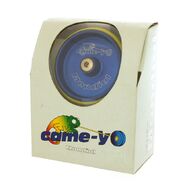 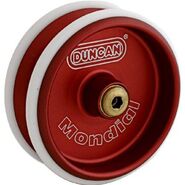