The concept of yo-yoing with a counterweight is patented by Steve Brown. In this article, Steve is quoted as regarding 7 to 1 as the best weight ratio between yo-yo and counterweight.

The first counterweights ever sold for freehand play were red dice with rounded edges and a hole drilled through for ease of connecting the string. The original dice was introduced with the original Freehand yo-yo. Later, yo-yos such as the Throw Monkey introduced bouncy ball counterweights.

Since Steve Brown's patent is designated to the Duncan Toys company, other yo-yo companies are not able to produce counterweights, or even yo-yos that are specifically designed for freehand play, unless they are licensed by Duncan. Many players have experimented with their own counterweight designs, however Duncan's hold on the patent prohibits unlicensed sale of these counterweights.

In 2011, YoYoJam acquired licensing from Duncan to create their own counterweights, known as Takeshi Dice, originally designed by the father of six-time concurrent World 5A Champion Takeshi Matsuura. These counterweights improve upon the original dice design by implementing a ball bearing inside the counterweight itself, allowing for instantaneous string tension adjustment. Each Takeshi Die also comes with an "Astro", a small bead that allows the user to perform Astrojax-style tricks.

In 2015, Jake Elliott developed a counterweight known as the UltraWeight, which is machined out of delrin and has an internal bearing that also allows for instant string tension adjustment and for the string to spin around with little friction. The UltraWeight features perfectly flat sides and rounded corners to make it comfortable to hold in the hand. Elliott had also obtained licensing from Duncan to produce the counterweight, which is being sold on YoYoTricks.Com along with the Canon yo-yo, which he also designed. He had also used the UltraWeight to win the World 5A Championship title at the 2015 World Yo-Yo Contest. 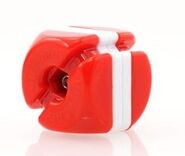 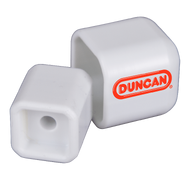 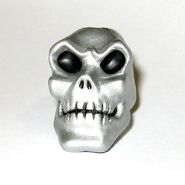 Skull Counterweight by Duncan
Add a photo to this gallery
Retrieved from "https://yoyo.fandom.com/wiki/Counterweights?oldid=44391"
Community content is available under CC-BY-SA unless otherwise noted.