The Milk is a yo-yo made by Paul Yath, and is the first ever product of Born Crucial. The first run was released March of 2007. The Milk earned its name due to its distinctive color. It also is machined out of delrin, because it is smoother than the normal celcon that is injection-molded in yo-yos such as the YoYoJam Lyn Fury, allowing for better grinds.

The retail price, and the fact that it would stay in production, is proving popular. Since the yo-yo is made of solid delrin, there is a washer inside where the axle is screwed in and a rubber ring to ensure that the Milk lasts longer so to prevent the delrin from rubbing against the metal. Another amazing thing about this yo-yo, is that it uses interchangeable SPR spacers. Buzz-On, at the time, still used SPR, but Paul's version is his own special kind, using a silicone groove for response.

In early July 2007, the 2nd run of The Milk was released to the market. Unfortunately, a number of products had vibration and wobbling issues due to the weight distribution. However, these problems could be fixed by centering the axle, which could also be time consuming. Also good for minimizing vibration in a second-run Milk is the addition of a string centering bearing, such as Dif-e-Yo's KonKave, or the Center Trac from YoYoFactory.

The removable rubber ring sits below the SPR

Close up of the SPR spacer 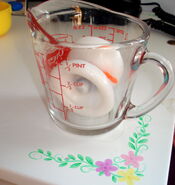 A cup of Milk (pretty cheesy joke, isn't it?) 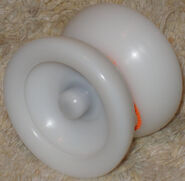 Side view of a green Milk
Community content is available under CC-BY-SA unless otherwise noted.
Advertisement