Custom Products (formerly known as Custom Yo-Yo) is a manufacturer of aluminum yo-yos based in Gilbert, Arizona. Most of their yo-yos had been in existence since the late 1990s, and as such, it doesn't compete directly with the manufacturers of other modern high-end metal yo-yos. In recent years, Custom had expanded their product line, also having become active in the paintball industry.

In the height of the yo-yo boom in the late 1990's, Custom was sued by Playmaxx/Proyo for infringing upon the Brake Pad patent. The alledgedly infringing system was developed by Eric Wolff, who had modified a fixed axle Reactor into a ball bearing axle yo-yo with response pads made from a Rubbermaid no-slip bathtub tread strip. Eric's design was incorporated into the Modified-shaped Chain Reactor, and eventually, all of Custom's ball bearing yo-yos.

After a judge ruled against Custom, they reached a settlement with Playmaxx agreeing to redesign their Performance Ring pads. 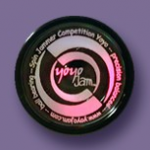