The Spike-Fly is a custom, made-to-order yo-yo produced by Dif-e-Yo. It is a variation of the Dif-Fly with an extended axle section, in order to accommodate YoYoJam spin top bearing tips on the sides. The bearing tips can be pressed in or pulled out, giving players the option of whether or not to use them.

The effect was to produce a very solid and stable yo-yo/spin top hybrid. Willie shows the potential of the Spike-Fly in the highly entertaining video, Metal Madness. The Spike-Fly can also be equipped with rubber rings on the rims, so that it could also be used for offstring (4A) play, making for a versatile, multi-style yo-yo.

Also released was an all-aluminum variant, the Gladiator, which has spikes machined into the sides of the body. 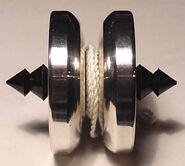 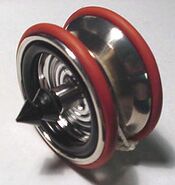 Retrieved from "https://yoyo.fandom.com/wiki/Dif-e-Yo_Spike-Fly?oldid=40333"
Community content is available under CC-BY-SA unless otherwise noted.