The changes are subtle compared to the Bare Bones, with the yo-yo resembling the latter model in respect with the KonKave bearing and flush dif-pads, but the profile has been redesigned giving the yo-yo more rim weight than any of the previous Dif-e-Yo models. The design on the inner face is flat, allowing for a small amount of centre weight. In addition the axle stub has been shortened by 1/8" to allow more room for ring grinds.

There was also an edition released for the 2006 world yoyo competition, featuring a green anodized coating and detailed laser engraving. 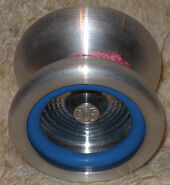 2006 Worlds Edition tin view 2
Add a photo to this gallery
Retrieved from "https://yoyo.fandom.com/wiki/Dif-e-Yo_Tank?oldid=19758"
Community content is available under CC-BY-SA unless otherwise noted.