The Wide Load by Dif-e-Yo was originally released in late 2002/early 2003 as a collector model, of which fifty-five units were produced. Each Wide Load yo-yo came with three sets of rubber weight rings (two black thick ones, and two sets of thin rings in red and black), five sets of interchangeable pogs (three sets of laminated paper pogs in yellow, orange, and fluorescent, along with two clear lexan pogs, and two aluminum pogs anodized in black with laser engravings), a display stand, and a combination tool for adding/removing the weight rings and pogs. It also comes with Friction Disc response, and a string-centering KonKave bearing.

In addition, eleven 24k gold-plated limited edition Wide Loads were produced, and each one came in a mahogany container with a 24 karat gold-plated laser-engraved insert on the lid. The container, without the lid, is shaped like a KonKave bearing.

A retail player version was produced later on, which only came with one set of thick weight rings, but it also comes stock with Dif Pad response, as well as a string-centering KonKave bearing. The Wide Load-F, the current version of the yo-yo, features flush-mounted Dif Pads. There is also a limited number of a special edition of this model that features satin-finished rims, the first ever Dif-e-Yo product to feature a satin finish, even if partially. 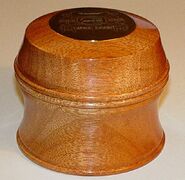 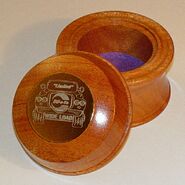 Ditto, open.
Add a photo to this gallery

Retrieved from "https://yoyo.fandom.com/wiki/Dif-e-Yo_Wide_Load?oldid=39483"
Community content is available under CC-BY-SA unless otherwise noted.