The Avenger by Duncan is a yo-yo that was first released in the Hardcore series in 1999. It is a plastic ball bearing yo-yo with a Modified-style profile, designed for looping play. It is usable for string tricks, as well, thanks to its adjustable string gap. With its fairly narrow string gap, it is good for performing beginner- to intermediate-level tricks. It also features a take-apart design like other yo-yos in the Hardcore series.

The original release of the Avenger featured a traditional starburst response system, while the later version of the yo-yo, referred to as the "Avenger 2", featured Friction Sticker response from Duncan.  It was eventually discontinued somewhere in the late-2000s. 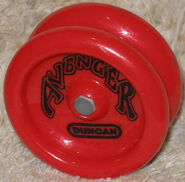 Retrieved from "https://yoyo.fandom.com/wiki/Duncan_Avenger?oldid=43808"
Community content is available under CC-BY-SA unless otherwise noted.