Original: Starburst
New version: Duncan Friction Stickers
The Ballistic by Duncan is a yo-yo first released in 1999 as part of the Hardcore series. It is a polymer ball bearing yo-yo with removable clear side caps and interchangeable graphical paper inserts. The side caps can be removed with a special metal tool that is included with the yo-yo, by inserting the tip of the tool into a notch and to pry off the cap from there. It also featured an adjustable string gap.

However, the Ballistic's most defining gimmick is its adjustable weight system, where the user can place or remove eight steel balls however they please for different levels of performance, whether for looping or string play.

At some point before 2006, the production molds for this yo-yo were changed. The original Ballistics from 1999 had a narrower string gap width and used the traditional starbursts. The newer versions have a wider gap, and used Friction Sticker response.

Some 2A players had used the original Ballistic. However, the new mold did not prove well-suited for looping play due to its wider gap width, which proved more suited to sleeping tricks. 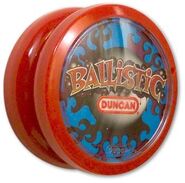 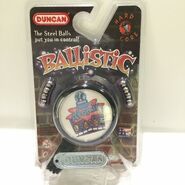