Original: Friction Stickers
Barebones Edition: Duncan Silicone Stickers (small bearing)
The Duncan Freehand Mg is a variant of the famed FH Zero in the De-Luxxe series, made from 99.5% forged magnesium with 0.5% other elements to stabilize and harden the metal. The Mg came in either powdercoated or anodized finishes. It was first released in 2004. After 10 years, it was discontinued in 2014.

It originally was packaged in a deluxe wooden box with a limited edition silver/black (or white/black) Duncan character counterweight set for 5A play. It also has a ceramic ball bearing, take-apart design, spacers for adjusting the string gap, and Friction Sticker response (the yo-yo comes with a set of four stickers).

The Freehand Mg originally retailed for $400-450 USD, making it the most expensive yo-yo of its time. In 2013, Duncan sold a "Barebones Edition" of the Freehand Mg for $200 USD, which is essentially the same yo-yo without the deluxe wooden box. Also, this version uses Silicone Sticker response, and also comes included a random, limited edition black/white counterweight. It also comes with a Dif-e-Yo KonKave bearing.

The initial releases of the Mg were either powdercoated red or matte silver. Later colors produced include powdercoated blue and green, as well as matte black. The Barebones Edition Mg's were produced in green and yellow-gold.

For the Mg's final run in December 2014, the Barebones Edition models were sold on the official Duncan website for $100 USD each, after which the yo-yo was finally discontinued.

Magnesium has some characteristics that made the Mg more pricey: 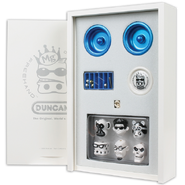 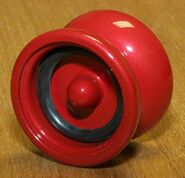 Freehand Mg with FH2 weight rings (no side caps)