The Freehand Zero (commonly called the FH Zero or just Zero, also abbreviated as FHZ for short) is a yo-yo produced by Duncan Toys as part of the Hardcore series. After the original Freehand's production mold broke, the FHZ was introduced in July 2004. In the interim, Duncan released the vastly different Freehand 2, and the Hyper Freehand was also produced by Bandai as part of the Hyper Yo-Yo line, serving as a suitable (though rare) replacement for the Freehand.

Steve Brown had originally intended to name the yo-yo the "Freehand X", but it was changed to avoid confusion with the Buzz-On Element X, which debuted some time before the FHZ had been finalized.

The FHZ was first available in Hong Kong, but was soon made available worldwide. Upon release, the FHZ was only available in six opaque colors, but throughout the years, a large number of editions have been released in a wide range of colors. Despite its low price compared to contemporary metal yo-yos, Tyler Severance used an FHZ at the 2007 Worlds to place 1st in the 5A division.

The FHZ also features a modular, interchangeable side cap system that allows the user to customize the look of his yo-yo however he/she pleases. This type of side cap has also seen use in other yo-yos by Duncan, even up to the high-end Screaming Eagle series.

Compared to the original Freehand, the FHZ's production quality is more consistent, due to some refinements in the molding process. Along with that, it has no permanent bearing seats in the body halves like the FH1 did.

The FHZ is very popular for modding, due to it being easily modifiable, leading to a certain versatility. As a matter of fact, Luke Vader specializes in modding FHZs with a special finish and/or recessed silicone repsonse systems. Along with that, Frank Difeo, the founder of Dif-e-Yo, had also machined a clear FHZ to have Brake Pad response. Some FH Zeroes are modified to have weight rings attached to the sides, or even hubstacks. Speaking of the former, Throw Down had produced aluminum weight rings for the Zero. Of course, some FHZ's were also modded to accommodate SPR kits from Buzz-On Industries.

The first few production runs of the Freehand Zero came with an O-ring spacer/shim spacer set-up for a twist-adjustable string gap width. However, after Worlds 2005, the newer-model Freehand Zeroes all come with a set of either thick spacers (full gap) or thin aluminum spacers (same gap as with the O-ring/spacer set-up). This new set-up eliminated the hassle of an ever-changing string gap width. Despite this change, some players still prefer the older O-ring/spacer configuration.

Internals, with a single Dif Pad in place

Modified FHZ with Throw Down Rings and hubstacks 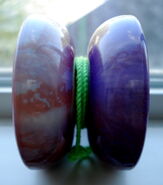 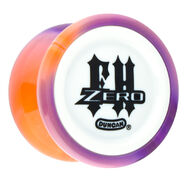 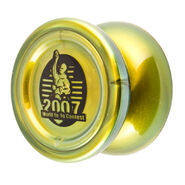 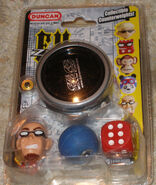 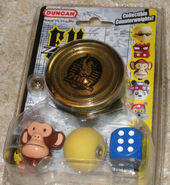 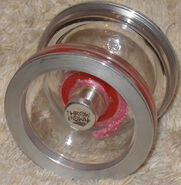 A clear FHZ modded with Throw Down rings and recessed silicone response
Add a photo to this gallery
Retrieved from "https://yoyo.fandom.com/wiki/Duncan_Freehand_Zero?oldid=44322"
Community content is available under CC-BY-SA unless otherwise noted.