Starburst
The Imperial is one of Duncan's two most iconic and best-selling yo-yos, alongside the Butterfly. It was first released in 1954, and has been a true classic since its introduction back then, and it is still in production to this day. It was even licensed for Bandai's Hyper Yo-Yo range in 1997 as the Hyper Imperial (Japanese: ハイパーインペリアル).

The Imperial is a plastic looping yo-yo with a fixed metal axle, starburst response, and a narrow string gap. Its profile is based on the older wooden Tournament 77 model.

Even though it is kids' stuff compared to more modern looping models such as the Yomega Raider, the YoYoFactory Loop 1080 and even Duncan's own Hornet, it had seen plenty of use back in the day by even the professionals, especially the legendary demonstrator Barney Akers. 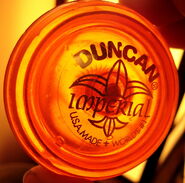 How many great players' first childhood throws were on an Imperial? God only knows how many! 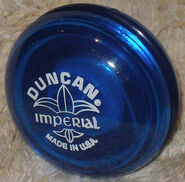 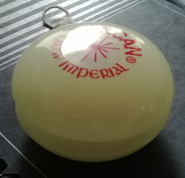 The Glow Imperial, a glow-in-the-dark version of the standard Imperial. 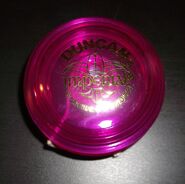 Duncan "Imperial" from 2007. Transparent pink version - made in China. 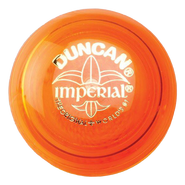