Recessed silicone
The Praxis 1.0P by Duncan is a limited release yo-yo in the De-Luxxe series in 2009. Only sixty production models were ever made and sold.

The first prototypes of the yo-yo were introduced at the U.S. National Yo-Yo Contest. They originally had magnets in their side caps to allow for specialized tricks utilizing them, but they did not function properly, so none of the units were purchased. The sixty limited production models, which had the magnets removed, were only sold on the official Duncan website, for a retail price of $125 USD each.

Duncan's 80th anniversary comes packed with many surprises; the first being the launch of the Praxis 1.0P.

Equipped with an entirely new axle system, the Praxis 1.0P works like an automotive axle system with one axle going through three bearings and both side caps spinning simultaneously; opening the door for an entire new fleet of tricks. 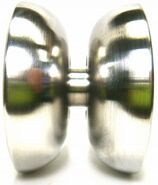 Internals 1. Side cap and one of the body halves

Internals 2. One of the body halves and the custom bearing 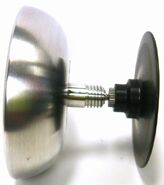