The ProYo by Duncan is a wooden-axle yo-yo designed for looping tricks, and is often confused with the older ProYo II. Understandably, there is truly no difference, as Duncan had simply taken over the production of the Playmaxx design when it bought out the latter's assets.

When Duncan first released their re-branded ProYos after buying out Playmaxx, a large percentage of pink-colored ProYos were, in fact, pink Bumblebees. Anybody that ended up getting a pink Bumblebee among these ProYos would feel lucky at getting it, considering the ProYo's low retail price.

As with the older Playmaxx ProYos, the wooden axle sleeve is a consumable good and will wear out and need replacement after extensive usage. In addition, they are also used for promotions, especially the Despicable Me film series. ProYos are also included in a $9.99 USD two-pack with the Speed Beetle yo-yo.

As with the older ProYo II, the Duncan ProYo was also licensed for the Hyper Yo-Yo line as the Hyper Loop (Japanese: ハイパーループ) in the 2004 iteration, and as the WoodBullet (Japanese: ウッドバレット) in the 2010s iteration. 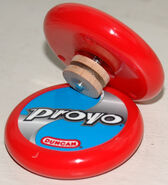 The halves and wooden axle sleeve 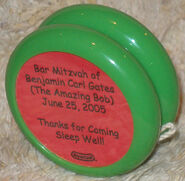 A ProYo given out exclusively at TAB's Bar Mitzvah 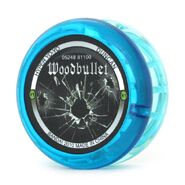 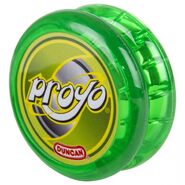