Starburst
The World Class was a fixed axle yo-yo first released by Duncan in 1981.

The World Class is a yo-yo like no other in Duncan's line-up during the 1980s, as it featured a body profile that is shaped like a capital letter "H". In addition to that, its fixed metal axle has a Reslon (thermal-bonded florocarbon resin) coating that, combined with the yo-yo's scientifically rim-weighted Inertia Rings, allowed it to spin 20% longer than anything else of its class at the time. As a result, the yo-yo had set a former Guinness World Record for the longest-spinning yo-yo.

The World Class also came included with a 48-page Duncan Yo-Yolympics trick book and an ID number that can be registered with Duncan's "Yo-Yo Players International" group, plus stickers of the ID number that can be placed onto the yo-yo. For a time, it was re-introduced in the early 1990s, made by Duncan using the same exact production molds from 1981.

Nowadays, not very many people know about this yo-yo, much less even own one, as despite the innovations it had presented, the World Class eventually faded into obscurity. 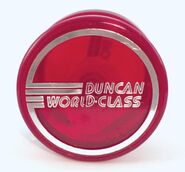 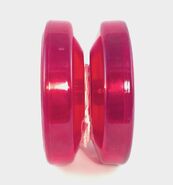