Flores yo-yos was founded in 1928 and was the first yo-yos produced in the US under the name yo-yo. It's founder, Pedro Flores, is widely credited with starting the yo-yo revolution in America. 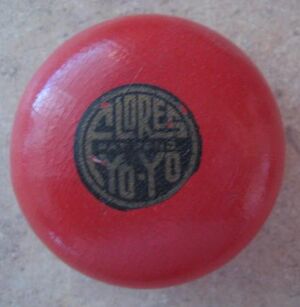 In early 1928, while working as a bellboy, Pedro Flores traveled to Los Angeles to ask for financial assistance in the manufacturing of yo-yos from a wealthy Philippine. Turned down, but not deterred, Flores returned to Santa Barbara with his idea. On 9 June 1928, at the age of 29, he applied for and received a certificate for conducting business as the Yo-yo Manufacturing Company in Santa Barbara. On 23 June 1928, Flores made 12 yo-yos by hand and started selling them to neighborhood children. These hand-carved yo-yos had an important innovation over the bandalores sold previously, the string was looped around the axle instead of typing it, thereby allowing the yo-yo to spin freely at the end of the string and opening a world of possibilities.

By November of the same year, the Yo-yo Manufacturing Company had created over 2,000 yo-yos and Flores was able to attract the attention of two American financiers, James and Daniel Stone of Los Angeles. With the financing and ability to manufacture yo-yos with machines, the company produced over 100,000 yo-yos in the next 4 months. A year later, in November 1929, the company had expanded to three factories (Flores and Stone, Los Angeles; The Flores Yo-yo Corporation, Hollywood; and the Yo-yo Manufacturing Company, Santa Barbara), employing 600 people and making in excess of 300,000 yo-yos daily.

Although some Flores yo-yo strings were made out of silk, allowing for less sleep action than later cotton strings, the product design was a success. Several different designs of the Flores yo-yo were done, with prices ranging from 15 cents to $1.50 in 1929, each depending on the design and decoration. Flores employed Dorothy Carter as his chief designer of his yo-yos.

Early contests helped in the spread of the yo-yo, but were very different to the more modern contests. Initially yo-yo endurance was the main event, with the winner the individual who could keep his or her yo-yo climbing up and down without missing for the longest period. As a result of this, many contests yielded ties after hours of continuous yo-yoing by competitors refusing to quit. In these cases the champion was frequently determined by drawing straws. Some additional categories that were featured at the Flores contests included the yo-yo thrown farthest with complete return and the largest number of perfect spins in a five minute period. In addition prizes were also awarded for hand made yo-yos, with yo-yos made out of bicycle wheels and wood barrel tops not uncommon submissions.

Flores had the trademark on the word yo-yo in the US (registered on 22 July 1930), but not as commonly believed a patent on the actual products. At this time the only yo-yo related patent was for the bandalore, however this didn't deter Flores from frequently using the words "patent pending" and "patent applied for" on the yo-yos, a tactic employed to deter competitors.

Donald F. Duncan, founder of the Duncan company and a competitor to the Flores products, bought the yo-yo trademark and company from Pedro Flores in 1932 for a reported sum of $250,000.00, a large amount of money in the depression of the 1930's. Duncan continued to market their line of Duncan products in addition to Flores products for a number of years. As a result of this, competitors in the early Duncan contests could either use a Duncan gold-seal or genuine Flores yo-yo.

Today original Flores yo-yos are well sought after by collectors, with original models selling for prices from $400.00 upwards on eBay, depending on the condition.