The Cut by HSpin is a V-shaped yo-yo with some very striking features. The biggest and most noticeable of these are the multiple steps cut into the yo-yo, giving it a sort of a disco ball-like look. Originally, it was only released as a raw yo-yo, but HSpin later released an anodized version of it. Unlike some of the other HSpin yo-yos at the time, namely the Pyro, it has very minimalistic laser engravings. Along with that, several special editions were produced. 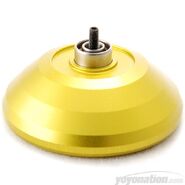 Anodized version of The Cut, internals 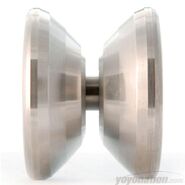 Profile
Add a photo to this gallery
Retrieved from "https://yoyo.fandom.com/wiki/HSpin_The_Cut?oldid=39479"
Community content is available under CC-BY-SA unless otherwise noted.