Original: Metal negative starburst and positive/negative pressure
2010 onwards: None
The Coral Snake by Henrys is a yo-yo and a Modified-shape counterpart to the Viper, first released in 1999. It was also the first yo-yo released as part of the AXYS system, featuring a Speed Explosion ball bearing axle. Besides the shape and design of the aluminum hubs, the biggest difference between the Viper and the Coral Snake is the built-in response system that the latter boasts.

For response, the Coral Snake uses metal starbursts with positive/negative pressure technology. This makes the Coral Snake one of the very few yo-yos to use a metal-based starburst response system. When combined with the Quicktrick gap adjustment system provided by the axle, it makes the yo-yo great for both looping and 1A play.

This novel response system (along with a recessed starburst modification commonly implemented on the Viper) was also the subject of a legal disagreement between Playmaxx and Henrys. This was believed to have lead up to the development of the ProYo Mongoose.

The 2010 version of the Coral Snake does not feature the metal starbursts as it did in the past, instead relying on the anodization on the inner surfaces of the hub. 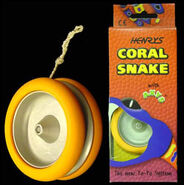 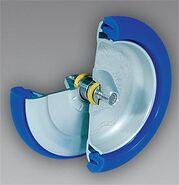 Cross-section of the Coral Snake circa 1999 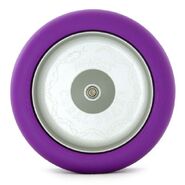 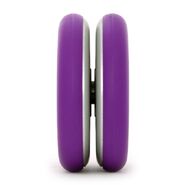 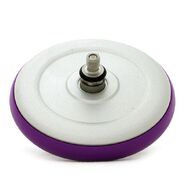 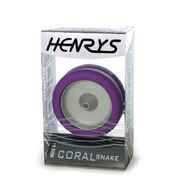