The Lizard by Henrys is a low-price string trick yo-yo first released in 1999. It is plastic with an H-shaped body and rubber rings on the rims. Originally, it had the same axle system as the original Viper. Since the release of the Coral Snake, it uses the AXYS interchangeable axle system, and comes standard with the Slider axle, which features a transaxle sleeve, along with the Quicktrick gap adjustment mechanism. The body also comes with recessed hole response functioning similarly to reverse starbursts. 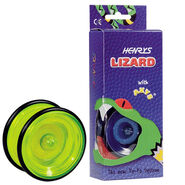 Original packaging
Add a photo to this gallery
Retrieved from "https://yoyo.fandom.com/wiki/Henrys_Lizard?oldid=41737"
Community content is available under CC-BY-SA unless otherwise noted.