HyperCluster PB Star Wing (Japanese: ハイパークラスターPBスターウイング) is a yo-yo in Bandai's HyperCluster series. It was released in Japan on February 11th, 2011, alongside the Loop.

Whereas the PB Star Loop is the basic looping model, the PB Star Wing is the basic yo-yo for string tricks, recommended for beginner-level players. Comes included with a string, user manual, and a customization guide.

The Wing Body is designed with a flared, Butterfly-style shape, ideal for string tricks. It is a semi-translucent blue in color. This piece is also sold separately as a standalone component.

This basic Core component features the axle where the bearing sits, as well as the traditional starburst response system. The Star Core is also sold separately as a standalone part.

It is simply a plastic transaxle sleeve with a groove where the string is placed. It is as basic as the other two components. 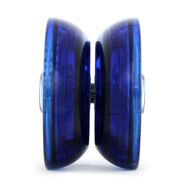 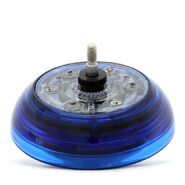 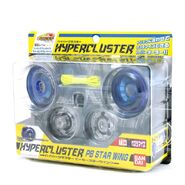 Retrieved from "https://yoyo.fandom.com/wiki/HyperCluster_PB_Star_Wing?oldid=40544"
Community content is available under CC-BY-SA unless otherwise noted.