The Ashiru Kamui is designed to be a less expensive version of the original Kamui, while still retaining its high-end performance in offstring play. To reduce the yo-yo's production costs, the Ashiru Kamui's body is injection-molded rather than machined. While this would make it sound as if the quality of the yo-yo would be lowered, but because of the attention to detail typical of Japan Technology, the Ashiru Kamui plays just as well as its predecessor.

Because it is injection-molded, the yo-yo comes in a variety of colors for the player to choose from. In addition to that, it uses 19.6mm Joker Pad response, so that the user could fine-tune the yo-yo's responsiveness with other 19.6mm-sized pads for their personal preferences. The Ashiru Kamui also comes included with Type 80 pads for a weaker responsiveness, which allow for more advanced tricks. Much like the original Kamui, it does not come included with a string, allowing offstring players to use their preferred string type.

JT Pads (YYR 19.6mm)
The Ashiru Kamui Light is a variant of the Ashiru Kamui released on October 31st, 2012 by Japan Technology. While the original Ashiru Kamui is injection-molded out of Delrin, this variation of the yo-yo is made of polycarbonate. It is larger yet lighter than its Delrin-based cousin, and easier on the user's hand and wallet. The string gap is also finely adjusted with plastic bearing spacers, and the yo-yo also featured silicone JT Pads, which are response pads designed specifically for offstring play. All in all, the Ashiru Kamui Light is designed as a cost-performance model, where it performs very well out of the box for a lower price tag.

The yo-yo is sold on its own as a standalone product, as well as in an Offstring Starter Kit for beginning players that also include an instructional DVD. Because it is made of polycarbonate, the Ashiru Kamui Light comes in an even wider variety of colors to choose from.

There were some complaints made, though, as it felt too light in the hands of some players, and that it had a very small middle ground for a clean bind, along with a smudge mark on one side that is a result of the molding process. These may be attributed to quality control. 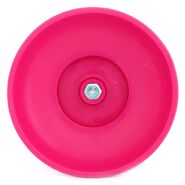 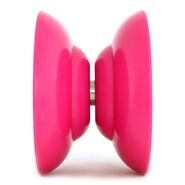 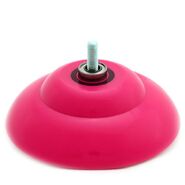 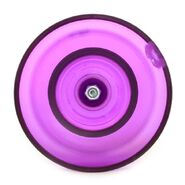 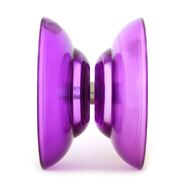 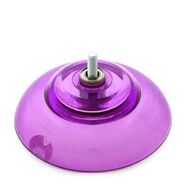 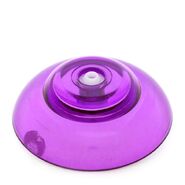 Internals 2, showing the plastic spacer
Add a photo to this gallery

Retrieved from "https://yoyo.fandom.com/wiki/Japan_Technology_Ashiru_Kamui?oldid=43803"
Community content is available under CC-BY-SA unless otherwise noted.