The Kamui is the first yo-yo ever produced by Hokkaido-based Japan Technology. It was first released in 2009.

This yo-yo was developed by world-class offstring player Atsushi Yamada, who had gathered the opinions and experiences from many professional offstring players and using the input to create the best possible yo-yo for such players. When it was released, the Kamui was one of the most expensive offstring yo-yos of its time, but those who had played with it would soon realize that its performance is well worth the money.

Unlike most other offstring yo-yos of the time, such as the YoYoJam Aquarius, Duncan Flying Panda and Shinwoo Griffin Wing, which were plastic with rubber rims, the Kamui was machined from a single block of Delrin, making for a much smoother spin like with a metal yo-yo without any seams that could interfere with play. At around 80mm in diameter, it is slightly larger than most others on the market at the time (except for the YoYoJam Big Yo), but it also features a wide, H-shaped Step Round profile to make catching easier and allow for safer landings. The Kamui can use large C-bearings, allowing players to use their favorite bearing in that size on the yo-yo. Along with that, it can use large-bearing O-rings for response, coming stock with silicone O-rings. But, it can also use O-rings made by other companies, such as YoYoJam. In addition, it also comes with no string, allowing players to use their own preferred string. This makes the Kamui a yo-yo that can be customized to the user's personal style and preferences and not the other way around.

Seeing that durability is an important factor in making an offstring yo-yo, Japan Technology had the Kamui thoroughly tested for strength. The second release of the yo-yo was given a slightly thickened axle for even more strength. The yo-yo also has an extremely useful quality in which it bounces off of the floor straight up after a drop, instead of towards or away from the user. This made recoveries much easier, and also allows players more time to improve on their tricks and less time having to chase their yo-yo around when it bounced.

With the smooth and responsive silicone O-rings, the Kamui does not suffer from the premature response issues caused by other models of the time. Also, because the yo-yo is machined out of Delrin, it is ideal for grinding techniques, too.

Players like Atsushi Yamada himself, Tsubasa Onishi, Yohei Kagawa, Futoshi Maruyama, and Kenji Eto have all used the Kamui on the competitive stage. It was also very popular among competition offstring players, especially at the 2010 Asia Pacific Yo-Yo Contest. 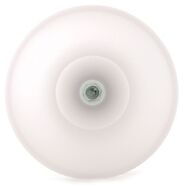 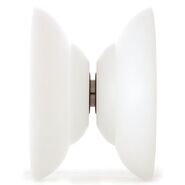 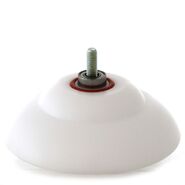 Retrieved from "https://yoyo.fandom.com/wiki/Japan_Technology_Kamui?oldid=43801"
Community content is available under CC-BY-SA unless otherwise noted.