Flow Groove Pads (Large Slim)
The Death Robot Mg is a yo-yo to be released in 2016 by Kyo's Toys.

The latest yo-yo design to come from Kyle Weems (A.K.A. Kyo), the Death Robot Mg is a high-end magnesium model, not unlike the older Duncan Freehand Mg or the General Yo Magnum. However, this yo-yo has the addition of four stainless steel weight rings, two on the outer rims and two on the inner side faces. This makes the Death Robot Mg a bi-metal yo-yo.

Magnesium is as strong as aluminum and is about third lighter, allowing great freedom of design and precise weight distribution without the yo-yo being too heavy. However, magnesium is an expensive and difficult material to work with, and is dangerous due to being flammable in powder or dust form.

One Drop had also contributed to the Death Robot Mg, helping out with machining the production yo-yos.

The prototype made its debut at the California State Yo-Yo Championship, where it had gained rave reviews from the players who tested it out. They were also showcased and tried out at the 2016 World Yo-Yo Contest.

In late August 2016, five pre-orders were accepted for the Death Robot Mg, each sold for $450, and the pre-ordered units have since shipped in October 2016.

On December 14th, 2016, a limited run of SE edition Death Robot Mgs were released and sold on the Kyo's Toys website.

In 2017, a number of "battle-damaged" Death Robot yo-yos that gained aesthetic blemishes during the manufacturing process were sold on Kyo's website at a discount. 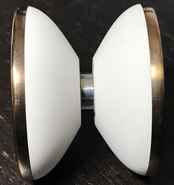 Profile
Add a photo to this gallery

Retrieved from "https://yoyo.fandom.com/wiki/Kyo_Death_Robot_Mg?oldid=43484"
Community content is available under CC-BY-SA unless otherwise noted.