The Phi was the second yo-yo design commercially released by Kyo. 150 yo-yos were made, of which 125 were sold through online stores, all of which were laser engraved with a unique serial number. The Phi is a large bearing yo-yo with a slick teflon finish and it came stock with Paul Yath's Carbon Fiber Friction Stickers. It started started shipping to customers from Infinite Illusions on May 11th, 2005.

According to Kyle Weems, the designer, the yo-yo's geometrical was designed around the mathematical principles of Phi, which is somewhat evident in the shape of the profile and rim weight distribution of the yo-yo, with an inner rim designed for Inner Ring Grinds.

The yo-yo also featured an ingenious reversible spacer system developed by Kyo, which allowed for three different string gap settings with just a single pair of spacers. These spacers became a problem, however, as they were manufactured slightly smaller than the recession in the yo-yo, causing some of the Phis to wobble and vibrate. Kyo attributed this design flaw to his manufacturer, and later released free replacement sets of new spacers that were made in the proper size. Despite eventually releasing the redesigned spacers, Kyo received significant negative press as a result of this design issue.

Side view. Photo Taken by: JeffreyPang911 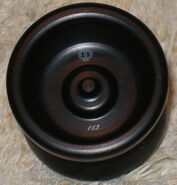 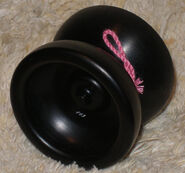 Ditto
Add a photo to this gallery

Retrieved from "https://yoyo.fandom.com/wiki/Kyo_Phi?oldid=41517"
Community content is available under CC-BY-SA unless otherwise noted.