The Hyper Wasp (Japanese: ハイパーワスプ) is a yo-yo licensed to Bandai by Playmaxx for release in the Hyper Yo-Yo line in the late 1990s.

Compared to the Hyper Loop, it is a significant step-up. The ball bearing also allowed for some of the basic sleeper tricks to be performed on the yo-yo. 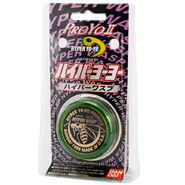