The Turbo Bumble Bee GT was a popular model when it was first released, earning it the nickname "The Butterbee" due to how smooth it was considered to play when the Brake Pads are broken in.

A special run of Turbo Bumble Bee GT's made of clear lexan plastic were produced and then custom-painted by John Higby. Each "Higby GT" painted by Mr. Yodel himself is a work of art into its own.

Its design was eventually the basis for similarly shaped yo-yos, such as the Cold Fusion GT, as well as the Stunt Pilot.

There was a one-off prototype concept of the Turbo Bumble Bee GT that was molded out of rubber instead of plastic. It was a simple two-piece design with areas for Brake Pads, spacers, bearing, pogs, and the axle bolt and retaining nut. There was one glaring flaw, however; when the yo-yo is spinning, the centrifugal force would pull the rubber body halves in unpredictable directions, making it wobble at first before eventually becoming unstable.

According to YoHans himself, the rubber used for the Rubber Bumble Bee was part of the original transatlantic cable, which was melted down and sold as raw material after it was replaced by better technology and removed from the Atlantic Ocean. A sample of the cable's rubber was molded to produce the Rubber Bee GT.

Through this link, you can see pictures of the yo-yo halves on Doctor Popular's 28 days blog that were emailed to DocPop himself by Tom Van Dan Elzen; http://doctorpopular.blogspot.com/2007/06/day-12-rubber-bee-gt.html

A special test run of Turbo Bumble Bee GT's that were molded from un-dyed ProYonium, prior to the release of the Stunt Pilot multi-style yo-yo. Only 12 to 15 units of this yo-yo were ever made, but these were not sold to the public. These special edition TBB GT's were only given out to Playmaxx's friends and members of the Yo-Yo Collective. Its pogs depict a cartoonish bee version of Steve Brown.

The idea behind the yo-yo was hatched one evening on Chimera's Yo-Yo Chat on Dave Hall's Yo-Yo Talk web board, by Tom Van Dan Elzen and several members of the Yo-Yo Collective. 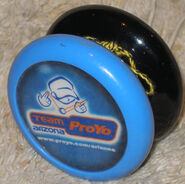 Retrieved from "https://yoyo.fandom.com/wiki/ProYo_Turbo_Bumble_Bee_GT?oldid=41280"
Community content is available under CC-BY-SA unless otherwise noted.