In 2011, Ed Haponik vowed to perform yo-yo tricks using only a fixed-axle yo-yo for the entire year of 2012, and to document his efforts on 365yoyotricks.com. For this very occasion, SPYY and TMBR collaborated to develop a custom-designed wooden yo-yo for him, the EH. It was made and perfected after extensive trial and error, and was delivered to Haponik in the December of 2011. Two units were produced, both made of oak wood with a take-apart design and replaceable hemlock axles. The EH was used to great effect by Haponik, who was able to complete his goal by New Year's Eve 2011.

It was in 2012 that a limited production version of the EH, based on the original version used by Haponik, was released exclusively on YoYoExpert. Only 40 units were made, each retailing for $35 USD. This model of the EH was hand-sawed of red oak wood, with a fixed walnut axle, and is equipped with a Type 10 cotton string.

A second run of this version was released in 2013, again on YoYoExpert, but with darker engravings and the body being made of white oak wood.

The 2014 release of the EH is an entirely new beast compared to the older versions, as it now featured TMBR's Reversible Woodthread Axle system, which gives it an adjustable body shape between an Imperial, Butterfly or Pagoda shape. As opposed to the earlier EH's, the 2014 model is made of white oak wood instead of red oak, making for a less porous body with more density and a smoother feel. It was limited to only 120 pieces.

Along with SPYY's return to the yo-yo industry and the introduction of the titanium TYY-01 in November 2015, a new version of the EH was released on December 18th, 2015, and was limited to only 96 yo-yos. It is pretty much the same as the 2014 version, but with Ed's initials printed on only one side for simplicity.

Once again, the EH was released by YoYoExpert, on December 19th, 2016. This time, however, it comes in four different exotic woods, again in limited quantities. This edition of the yo-yo comes in Wenge, Bubinga, Zebrano, and Ebony wood. The first three versions retailed for $85 each, but the Ebony wood version, of which only two units were ever made, cost $200 apiece and were only available for purchase via raffle.

Alternate side showing the SPYY logo

Profile, held by Ed Haponik
Add a photo to this gallery 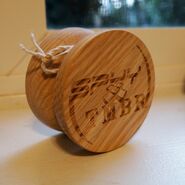 Retrieved from "https://yoyo.fandom.com/wiki/SPYY_EH?oldid=42731"
Community content is available under CC-BY-SA unless otherwise noted.