Shinobu Konmoto A.K.A. "S-Kon", is a yo-yo modder from Japan who has won many mod contests and is considered by many to be the most prolific and inventive modder of all time. He has won the 2004, 2005, and 2007 Modding Contest held in conjunction with the World Yo-Yo Contest, taking the crown held by Mo Chavez for a number of years. Instead of just modifying, he most often creates his own yo-yos. His creations include yo-yos made from blocks of origami paper, clear yo-yos with string filaments inside, leather wrapped yo-yos, and others. Some of his best known creations have been produced in limited quantities for sale, including Nostalgia and The Card. He is also known for helping to design the Duncan Freehand Mg, and had even made the prototype by hand. 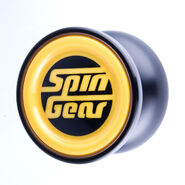