The Griffin Wing is a yo-yo released by Shinwoo in the late 2000s.

The Griffin Wing is a variation of the Zan Navi series developed specifically for offstring play. Its construction is of a plastic body with large, overmolded rubber wings forming a flared profile. It also comes included with reversible RSS bearing spacers, so that the user can adjust the Griffin Wing's string gap width for his or her own personal preferences. It also features an A-sized bearing and long-lasting rubber Shinwoo Pad response.

At 82.2 grams, it is hardly a lightweight, and its size is ideal for stability and spinning power. Removing the side caps not only lowers the weight to 73 grams, but also redistributes it towards the wings for increased spinning power.

Naoto Okada had used the Griffin Wing at the 2009 World Yo-Yo Contest to claim the world championship title in the 4A Division, proving the yo-yo's effectiveness in even a competitive setting. 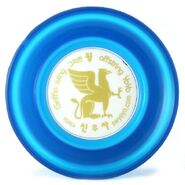 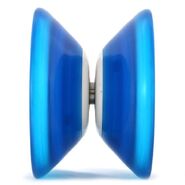 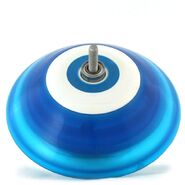 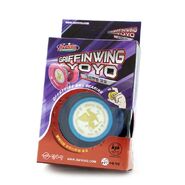 Packaging
Add a photo to this gallery
Retrieved from "https://yoyo.fandom.com/wiki/Shinwoo_Griffin_Wing?oldid=39829"
Community content is available under CC-BY-SA unless otherwise noted.