Shinwoo's Zan Navi is a multi-style yo-yo with oversized rubber rims, suitable for 1A, 3A, 4A, and 5A. It was sold with a counterweight, but not in the U.S. market, and for a good reason; if it were sold with a counterweight in the U.S., it would have violated Duncan's patent on 5A play. It was perceived by many players to be a Korean equivalent of the Duncan Throw Monkey, which also features rubber rims.

However, it is different from the Throw Monkey in various ways, primarily because it has a totally different design and more angular shape. Another very neat feature that comes with the Zan Navi is the RSS spacers. They can be flipped to adjust the string gap width, so that the user could change it from a tug responsive yo-yo to a bind responsive yo-yo, the spacers having different depth bearing seats on opposite sides. The yo-yo also features long-lasting rubber Shinwoo Pad response. 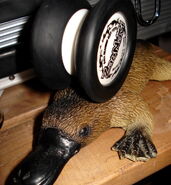 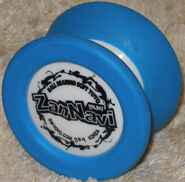 Retrieved from "https://yoyo.fandom.com/wiki/Shinwoo_Zan_Navi?oldid=44429"
Community content is available under CC-BY-SA unless otherwise noted.