The Renegade by SuperYo was first released in the late 1990s. It is essentially a ball bearing version of the fixed axle Triple Play, featuring that same unique axle set up which allows it it be changed between three different shapes: Butterfly, Imperial, and a novelty Pagoda profile. The Renegade uses a recessed starburst response system on both sides of the yo-yo halves, a relatively thin string gap, internal metal snap rings for weight, and a small bearing. Unlike the Triple Play, however, the Renegade was made of durable polycarbonate.

The yo-yo was much celebrated in the late 1990s and early 2000s, as part of the yo-yo craze during those times for its competitive performance. It was also very popular for modding and painting.

The starbursts tended to wear out quick from extensive usage, leading to a low-responsive yo-yo. This caused many players to experiment with adding new response systems, and from there, new yo-yo tricks were developed. Today, it is regarded as somewhat obsolete compared to more recent yo-yos. However, it is still enjoyed by some, and can still play on par with some yo-yos being produced today. At one point, Yoyoguy sold unassembled Oreo Edition (black/white) yo-yos to those wanting to put together their own Renegades the way they want.

The Renegade had three different iterations; the first version is known as the "Black Renegade" due to the fact they were black in color. The yo-yo is also distinguished from the other two versions due to the fact that the axle had hexagonal nuts on the ends. Unfortunately, these hex nuts were prone to stripping. Another significant design flaw, is that the string tended to slip between the bearing and spacers. This model had also made an appearance on The Tonight Show with Jay Leno at one point in time.

The second generation was dubbed the "White Renegade" that replaced the hexagonal nuts with star shaped nuts that were less prone to stripping, the white plastic was also a vast improvement on the previous black plastic. In addition, the string slippage problem was also fixed.

The third iteration was known as the "Color Renegade" and the "Transitional Renegade", as these yo-yos are distinct because they were sold in either solid colors (not black or white) or groovy transitional colors that mix together for visual impact.

The yo-yo was also released in a The NED Show edition as the Cosmic Spin, which features the NED slogan printed on it. Companies such as Infinite Illusions, and websites like Sector Y, had also distributed Renegade yo-yos for promotional purposes. Even the Honolulu, Hawaii-based Team High Performance had their own promotional edition of the Renegade (see Gallery below).

The second version Renegade came with the star axle. (from Dave Schulte's collection)

Painting clear Renegades was a huge trend in the late 1990s. This one was done by Eric Wolff as a prize for the best painted yo-yo at the 1999 Midwest Regionals. (from Dave Schulte's collection) 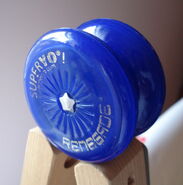 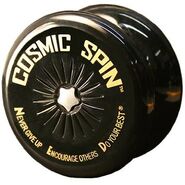 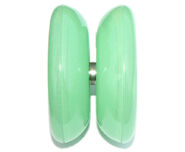 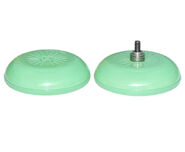 Retrieved from "https://yoyo.fandom.com/wiki/SuperYo_Renegade?oldid=44517"
Community content is available under CC-BY-SA unless otherwise noted.