The No Jive 3-in-1 yo-yo was invented and patented in 1978 by Tom Kuhn, and has been in production ever since, along with being one of Dr. Kuhn's most well-known designs.

It uses a metal rod with threaded ends that screw into reversible axle nuts inserted into the yo-yo halves holding them together. The rod passes through a wooden axle sleeve, giving the the 3-in-1 the play and appeal of a traditional fixed wooden axle yo-yo. This made it the first take-apart wooden yo-yo, and allowed it to be reassembled in three different shapes by turning one or both of the halves around: "Classic" (Standard/Imperial), "Flying Camel" (Butterfly), or "Pagoda" style. The design also made it easier to untangle knots from the string. The ability to change between shapes also allowed the user to switch to different playing styles with having to alternate between two different yo-yos.

Tom had made at least 30 different prototypes and tried many different materials for the axle and string before settling on his final design.

Originally made with a plain maple finish, the No Jive has been seen finished in stained, airbrushed, laser-carved, and even multi-layer laminated styles over the years. The success of this yo-yo established Tom Kuhn as America's premier manufacturer of wooden yo-yos.

In November 2016, Tom Kuhn himself found an old batch of 100 original No Jives from the old days, and the yo-yos are sold online at YoYoExpert. 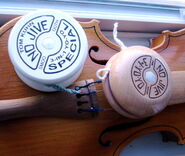 Two No Jive 3-in-1's, one of which being the 25th Anniversary Special
Add a photo to this gallery

Retrieved from "https://yoyo.fandom.com/wiki/Tom_Kuhn_No_Jive_3-in-1?oldid=42140"
Community content is available under CC-BY-SA unless otherwise noted.