The Silver Bullet (also known retrospectively as the SB-1) by Tom Kuhn is a yo-yo first released in 1984. It was the first-ever yo-yo to feature a full-metal body, which is machined out of aircraft-grade aluminum. It was also named for the bullet-shaped axle hubs that it had on its sides. It also boasts a replaceable wooden axle sleeve in the vein of yo-yos like the No Jive 3-in-1 and the ProYo.

At some point in its history, the Silver Bullet underwent a small redesign in profile, and this later model was sold by What's Next Mfg./BC Toys well into the 1990's. The original Silver Bullet, sold out of Doc Kuhn's San Francisco shop, and the more common re-designed version are both highly-prized collector's items by today's standards.

There was also a rare anodized version, of which only fifty were produced. Instead of bare polished aluminum, the yo-yo is clear anodized giving it a dull metallic color (see photo links below).

The Silver Bullet, with its aluminum body, had planted the seed for a new legacy of full-metal yo-yos, such as in 1990, where its successor was introduced to the world. In 2012, the original Silver Bullet returned, alongside the SB-2 and the limited-production SB-3 in a special collector's set, of which only 50 were produced.

This yo-yo is only referenced by Lucky. No pictures or proof has ever surfaced of it. Dr. Tom Kuhn himself has said he cannot recall a special model ever existing.

The legendary Silver Bullet itself (from Dave Schulte's collection) 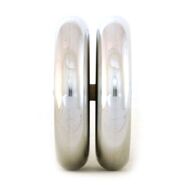 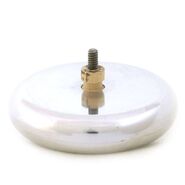 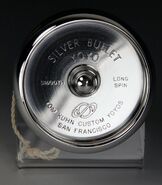 SB-1 from the set of three