The F.A.S.T. 201 (often referred to simply as the 201) by YoYoFactory is a yo-yo originally released in 2003, having first debuted at the U.S. National Yo-Yo Contest.

As YoYoFactory's flagship product, it was initially distributed in the United States by Hasbro Toys, and promoted through television commercials, as well as being the subject of the F.A.S.T. Challenge.

Over the years, the yo-yo became a best-seller for YoYoFactory, having sold millions of units worldwide to date. It was even licensed to Bandai for the 2010s iteration of their Hyper Yo-Yo range as the Mercury (Japanese: マーキュリー).

The F.A.S.T. 201 is an injection-molded plastic yo-yo with a similar shape and specifications to the Duncan Freehand, including a small A-bearing. However, the 201 also features metal snap rings under the side caps, and is distinctive in that it implements a totally unique response system.

This yo-yo was named for its novel "F.A.S.T." response system, an acronym for "Fully Active Starburst Technology," which was invented, coined, and patented by Hans "Yo-Hans" Van Dan Elzen. The F.A.S.T. consists of two sets of large spokes, the pointed ends of which fit through holes on the inner surfaces of the yo-yo, forming a starburst on both sides. According to YoYoFactory, the F.A.S.T. system is advantageous because it never truly requires maintenance, in contrast to pad-based response systems such as BPT or friction stickers, which require replacement when the pads wear out from extensive usage.

The responsiveness of these starbursts can be adjusted by twisting the halves of the yo-yo body, changing the alignment of the spokes, and by extension, altering the string gap width. When the string gap width is narrowed, it is more responsive, and when the gap is widened it is made less responsive but longer sleeping for more advanced tricks. The adjustable string gap component of the F.A.S.T. system also consists of O-rings beneath the bearing spacers which facilitate the tightening and widening of the gap.

While the F.A.S.T. system was the yo-yo's most defining attribute, combined with the hollow plastic body, it was notorious among seasoned players for being incredibly loud and noisy, producing an incessant buzzing sound. As a result, the 201 was subject to various modifications, removing the F.A.S.T. spokes in order to fill the holes with silicone, as well as adding weight, and various other cosmetic alterations.

At one point in time, YoYoFactory hosted an art contest judged by John Higby, in which unassembled F.A.S.T. 201s were sold, encouraging participants to paint, dye, or otherwise creatively assemble their yo-yos. There was also a limited run of F.A.S.T. 201s that featured chrome-colored spokes, as well as a limited run of yo-yos with metallic gold spokes, which were often given away as prizes.

Along with the F.A.S.T. 201, YoYoFactory also created the F.A.S.T. Challenge, a traveling competition in which players (using F.A.S.T. 201 yo-yos) race to finish a set number of tricks. Whoever that finishes the challenge first is the winner. 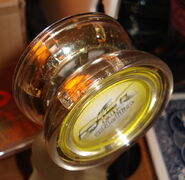 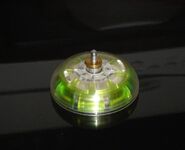 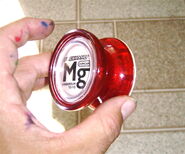 Playing Card mod by e.h.
Add a photo to this gallery

The reason of this modification is to change F.A.S.T 201's starburst to other response systems, and it can increase the sleeping time for more sufficient 1A, 3A, or 5A playing.

This modification is performed by anson liang

Shim x 2 (size can be optional) - for widen string gap

or cut off the starburst plastic

Recess may apply to this modification

Retrieved from "https://yoyo.fandom.com/wiki/YoYoFactory_F.A.S.T._201?oldid=44362"
Community content is available under CC-BY-SA unless otherwise noted.