String On String (S.O.S.) w/ starbursts
The Loop 720 was a plastic looping/2A yo-yo produced by YoYoFactory, released in the Summer of 2008. Ben McPhee, one of the co-founders of YoYoFactory, had posted an estimated retail price of $20 USD apiece to the forums, with the actual price coming in at $21.99 USD. The yo-yo has gained attention for a novel response system, which involved the use of yo-yo string.

This response system, known as "String On String" (S.O.S. for short), consists of many holes drilled around the bearing area. Through these holes, yo-yo string would be threaded using a plastic threading needle included with the yo-yo. This allows the response to be very customizable. The user can utilize different types of string, thicknesses, and threading patterns to achieve his/her desired level of responsiveness. It is also complimented by tiny starbursts placed between the string response and the ball bearing.

Also released were ten limited edition Loop 720 yo-yos hand-painted by Jensen Kimmitt in a collaboration between YoYoFactory and CLYW.

Unfortunately, despite the potential of the novel S.O.S. system, Loop 720 lacked the high-end focus needed to satisfy the greats of 2A play, so YoYoFactory went back to the drawing board. From there, they developed the Loop 900.

Starburst
On March 29th, 2017, the Loop 720 was re-launched, with some notable changes to the internals. This version of the Loop 720 no longer contains the S.O.S. response system found in the original, settling for a traditional starburst response, and a new K-sized SPEC XS bearing can be found in place of the original A-bearing.

Both a U.S.A. and Japanese version of this yo-yo were released, with differing side cap designs to tell them apart. However, the string gap width, and by extension, responsiveness, is also different between the two versions. Pricing is also different, with the Japanese version, which is a signature model of Shu Takada, costing $17.99 USD, compared to the U.S.A. version's $14.99 USD.

On December 1st, 2017, a Snowflake edition of the Loop 720 was released. This version came with a special pair of blue "freestyle" spacers, which increased the yo-yo's spin time.

On January 9th, 2018, a John Ando edition of the Loop 720 was released. This version is only exclusive to the YoYoExpert site, and is notably similar to the Shu Takada edition 720, but with differing side caps and colorways.

In 2019, iYoYo owner David Geigle teamed up with U.S. National Grand Master Bill de Boisblanc and released a variant of the Loop 720 equipped with a B-sized bearing, of the type formerly used by YoYoJam's looping yo-yos, the Sunrise. The Sunrise, though based on the body of the Loop 720, is sold under the iYoYo marque. 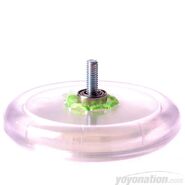 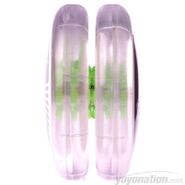