The Protostar by YoYoFactory is a yo-yo first released in 2009. It is the signature series model of John Ando.

To challenge the common belief that metal yo-yos are superior in a competitive setting, YoYoFactory started the "Death to Metal" series, a line of high-performance plastic yo-yos that could match or even surpass metal yo-yos in competitions, as well as costing less. The Protostar, the first of these plastic yo-yos, was developed by YoYoFactory in collaboration with 2008 World 1A Yo-Yo Champion John Ando.

The Protostar made its debut at midnight in the 2009 World Yo-Yo Contest, where the first prototypes of the yo-yo were showcased and sold. Its low-edged Step Straight design reduced sleep loss to a minimum, and its inset aluminum weight rings along with a Center Trac bearing made it very stable, more-so than even its full-metal competitors at the time of its release. That night at Worlds, the Protostar made an impact in the yo-yo community, and it has been released in many colorways since then. The Japan Collection version of the Protostar, released in March 2015, featured a rounded side on its weight rings.

The yo-yo had also become the basis for certain other yo-yos listed below: 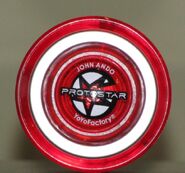 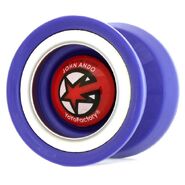 Japan Collection 2015 version. Note the design of the weight rings.
Add a photo to this gallery

Retrieved from "https://yoyo.fandom.com/wiki/YoYoFactory_Protostar?oldid=44550"
Community content is available under CC-BY-SA unless otherwise noted.