The Aquarius was the first major 4A (Offstring) yo-yo from YoYoJam, and (technically) their second offstring model after the earlier and limited OS1, released as a signature series yo-yo for Hironori Mii. It was discontinued in 2002 and replaced by the Free Agent in 2003.

It was re-introduced in 2004 when the Free Agent failed in the market. After five years (during which it went through a redesign here and there), the Aquarius was finally discontinued for good in the Spring of 2009, due to manufacturing difficulties.

The Aquarius was one of the most popular offstring yo-yos of its time, especially in the competitions, along with the Duncan Flying Panda and Shinwoo Griffin Wing. The record for the longest Shoot the Moon was held by U.S. National Master Dave Schulte A.K.A. "Dazzing Dave" using an Aquarius.

Alchemy had also produced aluminum Aquarius Rings for use on the yo-yo. The plastic side pogs on the Aquarius can be replaced with these rings, adding 10 grams of weight for longer spinning and enhanced stability.

The plastic/rubber configuration of the Aquarius has returned, in the form of Ben Conde's latest signature yo-yo, the Go Big, which is based on the Prelude, but with rubber rims just like the Aquarius. 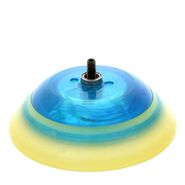 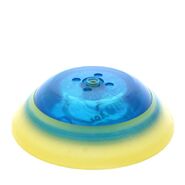 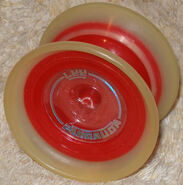 Retrieved from "https://yoyo.fandom.com/wiki/YoYoJam_Aquarius?oldid=43261"
Community content is available under CC-BY-SA unless otherwise noted.