The Big Ben, released as a signature series model of Ben Conde, was one of YoYoJam's first 4A yo-yos. It was popular with many 4A players due to its oversized body, which made it very easy to land tricks. Soon after its release, YoYoJam created its successor model, the Bigger Ben. Surprisingly (and ironically), the Big Ben is actually larger in size than the Bigger Ben.

Many professional-level players, such as John Narum, Jeff Coons, and Tsubasa Onishi, had used this yo-yo to win at the competitions. There were also several examples of the Big Ben that were hand-painted by John Higby, as well.

John Higby painted for the AYYA commemorative yo-yo for the 2003 season. (from Dave Schulte's collection) 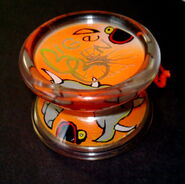 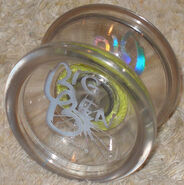 A clear Big Ben
Add a photo to this gallery

Retrieved from "https://yoyo.fandom.com/wiki/YoYoJam_Big_Ben?oldid=44692"
Community content is available under CC-BY-SA unless otherwise noted.