The Dark Magic by YoYoJam was the first signature series yo-yo of World Yo-Yo Contest Judge and former Captain of Team YoYoJam André Boulay, and the successor to the original Hitman. Designed by Boulay himself, it has been used by many famous players to place as high as 2nd in the World Yo-Yo Contest and 1st in the U.S. National Yo-Yo Contest.

The Dark Magic was designed specifically for Andre's ring grind techniques and features the typical hybrid o-ring/starburst response system. Although it is a fairly wide yo-yo, it does not suffer from stability issues because much of the weight in the aluminum rings is concentrated closer to the bearing than most other YoYoJam yo-yos in the line-up at the time.

The Dark Magic was one of the most successful yo-yos in YoYoJam history, and was released in several editions. It has since gained a worthy successor model in the Dark Magic II. 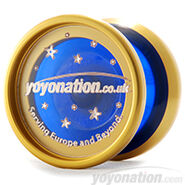 Yoyonation.co.uk edition
Add a photo to this gallery

Retrieved from "https://yoyo.fandom.com/wiki/YoYoJam_Dark_Magic?oldid=42923"
Community content is available under CC-BY-SA unless otherwise noted.