YYJ Silicone O-rings
The Dark Magic II by YoYoJam is the successor to the ever popular Dark Magic, the signature series yo-yo of U.S. National Yo-Yo Master André Boulay. This second version of the legendary yo-yo features a variety of differences from the original.

The first is the reduced rim weight; the previous version weighed in at a rather hefty 70 grams, and at the request of many members of the yo-yo community, YoYoJam had reduced the weight to a more comfortable 67 grams. The diameter is slightly smaller, but the width is slightly wider.

One of the bigger differences between the two yo-yos, is that the Dark Magic II features a Solid Spin Axle system to reduce the chances of cracked hubs, with the bonus of increased longevity. The Solid Spin Axle also provides an adjustable string gap that caters to narrow or wide C-bearings. The yo-yo also features silicone O-ring response.

Another difference is that this version ships with a narrow, responsive bearing in the yo-yo, to learn beginning to intermediate tricks. When the user is ready to move on to more complex tricks, the Dark Magic II also comes included with a dry, 10-ball Speed Bearing, which allows for 100% completely unresponsive play.

The Dark Magic II proved to be one of YoYoJam's most successful and best-selling yo-yos in the 2010s, especially on retailers such as YoYoExpert, where it was the #1 choice. Many editions were released of it, one of which being a special 10th Anniversary edition to celebrate 10 years since the release of the original Dark Magic yo-yo back in 2004. 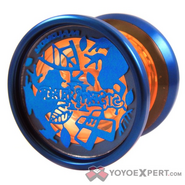