The Legacy was developed as a less expensive, simplified successor model of the Dark Magic, made of injection-molded celcon and instead of the adjustable gap, it has a fixed gap that is wider than on the original Dark Magic. Its profile is also shaped like the Dark Magic's. The Legacy, unlike previous YoYoJam releases before it, has metal weight rings underneath the side caps, rather than on the outer rims.

It also featured YoYoJam's new silicone O-ring response system which is less responsive than the standard rubber O-rings of previous yo-yos, allowing for more advanced string play. These new O-rings are made in the popular "Large Slim" size (19mm OD). This yo-yo was meant to bring advanced, low-responsive tricks at a lower price point, competing directly with products like YoYoFactory's Plastic Grind Machine.

The Legacy II is a redesign of the original Legacy, released in 2011 by YoYoJam. It comes included with two different C-bearings; a 10-ball Speed Bearing for unresponsive play, and a narrow bearing for the less advanced tricks. It also features the Solid Spin Axle system for extra strength and durability, along with silicone O-ring response.

The Legacy III, released in 2013 by YoYoJam, is the third and final edition of the Legacy series. It has thicker outer rims, making it a bit heavier than the Legacy II by about three grams. Of course, it has all the other features like the previous yo-yo. 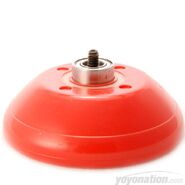 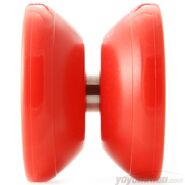 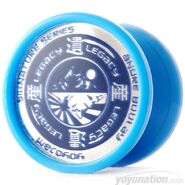 Graphics on reverse side
Add a photo to this gallery

Retrieved from "https://yoyo.fandom.com/wiki/YoYoJam_Legacy?oldid=44790"
Community content is available under CC-BY-SA unless otherwise noted.