The New Breed by YoYoJam is an Eric Koloski signature yo-yo. It is also the first YoYoJam celcon yo-yo to also have aluminum weight rings on the outside of the rims, like that of the X-ConVict and the popular Dark Magic. This means that it plays much like the Dark Magic but also grinds as well as the Lyn Fury. It also has the same silicone O-ring response system as the Legacy series, Axiom and Meteor so it plays nice and unresponsive out of the box.

The later release of the New Breed featured a Solid Spin Axle, allowing for extra strength and durability, as well as an adjustable string gap that can adapt to a wide or narrow C-bearing. 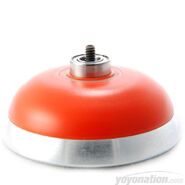 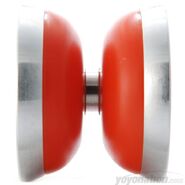 Profile
Add a photo to this gallery
Retrieved from "https://yoyo.fandom.com/wiki/YoYoJam_New_Breed?oldid=40153"
Community content is available under CC-BY-SA unless otherwise noted.