The SpinFaktor HG was first announced in March 2005 and was released on April 15th, 2005 by YoYoJam to create a mid-priced model between their lower-end plastic and higher-end aluminium-rimmed models. This was the first yo-yo in the YoYoJam range to use a denser plastic material to add rim weight, instead of the usual aluminum rims used in their other models.

Also released was a 2005 Japan National Yo-Yo Contest edition of the yo-yo made with enyo plastic.

This yo-yo, along with its heavier variant, the limited-production SpinFaktor HG Xtra, were the last yo-yos to carry the SpinFaktor name until the release of the SpinFaktor X in 2010. 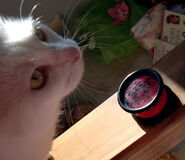 SFHG... with a cat for comparison. 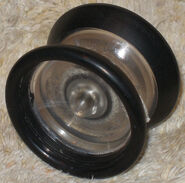 Clear HG with no caps 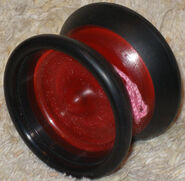 Clear Red HG with no caps