The SpinJammer, released in 1998-1999, was one of YoYoJam's very first yo-yos, along with the Dragon Fly.

When Dale Bell, the founder of YoYoJam, hand-turned his first prototype yo-yos out of metal in his tool room at Advanced Air International, he figured out right away that they were too heavy, so he devised a mold to match the hand-tooled models. After extensive trial and error in the molding room, the original SpinJammer was finally developed.

It was used at the 1999 Worlds, where it was met with lukewarm reception, compared to its Butterfly-shaped counterpart that was made just before the contest, the Dragon Fly. Philip Travelant used a modified SpinJammer to compete at Worlds, but had failed to score high enough on his compulsories to reach the finals.

For the technical details, the SpinJammmer features a puck-like body profile with faint Butterfly curves, which in theory, would have made it versatile for both looping and string play. It also has a ball bearing axle for long spin times and an adjustable string gap. It did not feature a proper response system, but the molding dimples on the inner surfaces of the body halves did function like weak starbursts.

The yo-yo was sold on the official YoYoJam website in different colors, until it was eventually discontinued in the Fall of 2000.

Side view. Image credit to yoyo.babyblue.jp 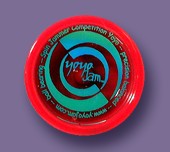 The SpinJammer in Grape. Image credit to yoyoguy.com
Add a photo to this gallery

Retrieved from "https://yoyo.fandom.com/wiki/YoYoJam_SpinJammer?oldid=44663"
Community content is available under CC-BY-SA unless otherwise noted.